Fictional Romance with a Cajun Flair

MEAGAN’S MARINE is book 3 of my Halos & Horns series, which is a spin-off series from my La Fleur de Love series. Seriously folks, I started a spin-off series so I could put real people on the covers of my books. It’s a little difficult to form a physical bond with a silhouette…know what I mean? 😉  I chose the fabulous Scott Nova as the male cover model for my book, simply because he fits my mental image of Master Sergeant Mitchell Hebert. Right at 6′ tall and as fit as a Marine of 20 years. Had my fabulous cover artist, Kim Killion, add the USMC tattoo on his arm. I’m partial to the old globe and eagle tat, since my daddy, a WWII vet, had one on his arm also.

Incidentally, MEAGAN’S MARINE also got a rave review from InD’tale review magazine, and it’s building a decent amount of favorable reviews on Amazon, as well. Here’s what InD’tale had to say. 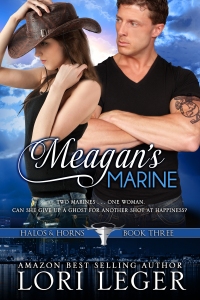 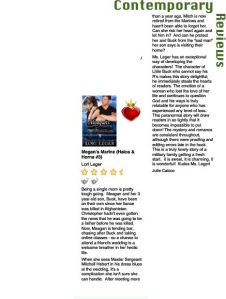 It’s tough going for single mom, Meagan Hutton. She has to keep up with an active three-year-old son, her job as bartender extraordinaire at Red’s club, and her online college classes—all while doing whatever she can to make ends meet. Throw in paranormal activity of the creepy kind, happening with disturbing frequency in her home, and she’s struggling just to stay sane. The last thing she needs is a handsome, though hesitant, Marine sniffing around her or her son.

Master Sergeant Mitchell Hebert, recently retired from the U.S. Marines, likes keeping things simple. He’s had an easy time of it, right up until a pretty barmaid with a Texas twang crept her way into every thought his last several months in the middle east. When they met a year ago, a relationship seemed promising, until he discovered she was a package deal. Turns out, her ex-fiancé, a fellow Marine who lost his life in Afghanistan, left her with a son to raise on her own…and a little something extra.

The Halos and Horns series is filled with new characters you’ll love, along with frequent appearances of old favorites from my La Fleur de Love series. Enjoy!